Tuckahoe was built by the Randolf family between 1714 and 1740 near Manakin, Virginia, overlapping both Goochland and Henrico Counties.  Thomas Randolf began construction of the house around 1714. His son, William, built a two story four room house in 1733 and added a center hall by 1740. The house is known for its unique H-design, pine and black walnut paneling, exquisite carvings and moldings, and the fact that it was for a time Thomas Jefferson's boyhood home.

William Randolf (1712-1746) was the son of Thomas Randolf of Turkey Island, Charles City County, Virginia.  He married Judith Page, the daughter of Mann Page of Rosewell.  He was a close friend of Peter Jefferson, Thomas Jefferson's father, and asked in his will for Peter to care for his family at Tuckahoe in the event of his death.  When William died in 1746 Peter brought his family, including young Thomas, to live at Tuckahoe. Jefferson remembered his youthful time there fondly and may have picked up his interest in architecture from admiring the fine carvings and designs of this great house. 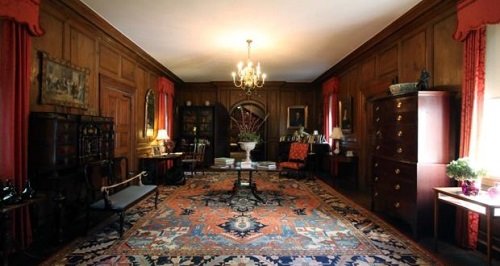 Photo by Woman Around Town

The walnut-paneled salon occupies the center hypen that connects the two wings of the house.  It contains many marvelous features and designs, most notably stairways that are outstanding examples of the early Georgian period. The north stairway, for example, has a principal newel post in the form of a Corinthian colonette carved with vines and flowers and square fluted intermediate posts. These were unusual forms, seen elsewhere only on the stairway at Rosewell. The north stair also had splendid carved landing and gallery fascias. The central motif of the gallery fascia is a basket of flowers from which a rinceaux of leaves extend the full width of the gallery. This is also similar to the staircase at Rosewell.