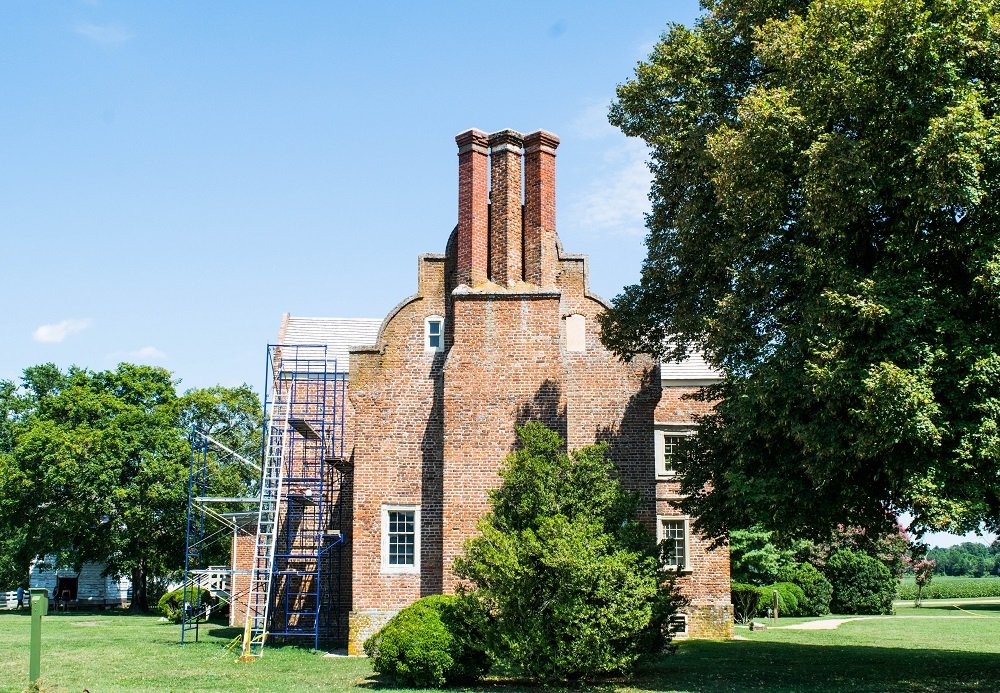 The grounds of Bacon's Castle have yielded rare historical and acheological treasures. Archeological remains of some of the earliest dependency buildings found in Virginia have been discovered on the grounds.  So, too, has evidence of one of the earliest formal gardens in America.  One of its vernacular buildings, a barn, was likely built in 1701 and still remains to this day.  All in all, a remarkable example of early colonial life. 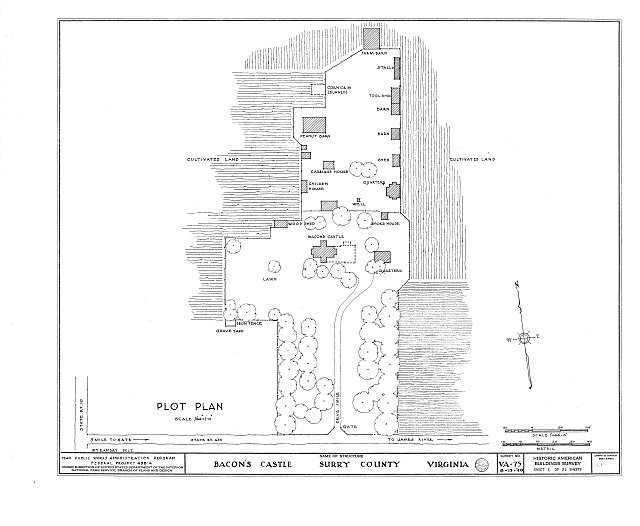 The plot plan for the original house is not completely known.  In 1665 we know the house was built on 550 acres owned by Arthur Allen. By the time of his death in 1669, he had expanded his estate to a total of 2,450 acres.

Bacon’s Castle had numerous outbuildings or “dependencies.”  Archeological excavations reveal two advanced buildings (Buildings I & II) along the front (south) path to the main house. They were most likely constructed in the 18th century.   About 70 feet south of these sites were two additional buildings (Buildings III and IV) that were likely from the late 17th century or very early 18th century.  Recent excavations revealed the remains a large structure close to the great house that may have been a kitchen and/or laundry.

There were likely other original structures scattered about the grounds that have long disappeared.  One surviving early building is a barn likely built in 1701, which was the time of Arthur Allen II. The surviving slave house is such a quarter, likely built circa 1829.

Unusual for the time and place is the fact that Bacon’s Castle had a formal garden. Created between 1680 and 1690, it was fenced in and used not only for growing herbs and vegetables but for strolling and sitting.

About 1000 feet east of the main house is an archeological site called Castle Mill Run. Evidence suggests that it was a protected (palisade) settlement from the mid-17th century.

The Castle Mill site is a treasure trove of archeological findings.  Archeologists discovered a post and ditch complex delineating an enclosed area with a fence or palisade. Postholes had been dug to seat vertical boards for the post-rail-and-plank fence that was normally used for protection. 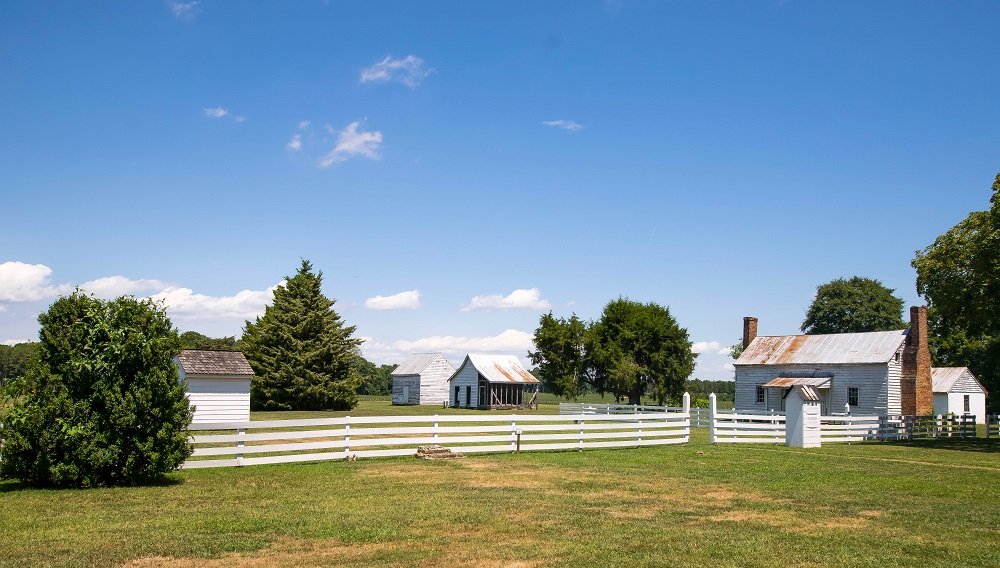 Archeological excavations have revealed a number of brick outbuildings at Bacon’s Castle.  Building I is a ten foot square structure likely of 18th century origin.  It had a back-filled basement with a bulkhead entrance which suggests that it was a building of considerable worth.   It was situated about 115 feet from the front of the main house along the path leading to the entrance.

About 70 feet south of Building II, the remains of another dependency (Building III) were discovered.  It likely dates from the late 17th century.  Fragments of brick, sonte tile, shell mortar and wine bottle glass were found in the dig.

Another brick building south of the main house (Building IV) existed along the same line as Buildings I and II.  We don’t know when it was built, but it was likely destroyed around 1800.   There could have been a matching building on the other (east) side balancing it.

One of the most exciting recent discoveries at Bacon’s Castle is the remains of a large structure 20 or so paces east of the house’s mid-1800s addition.   Nick Luccketti, the head of the James River Institute for Archeology, concludes that, “This was a very substantial building.   […]  [It] probably combined the functions of a kitchen with that of a laundry or a brewery." 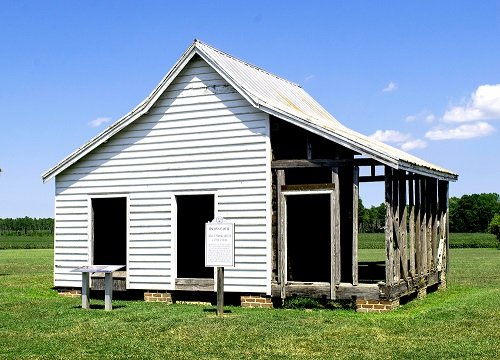 Further away from the great house, in the working space on the north side, is an important structure dating from the early history of Bacon’s Castle.  It is a framed smoke house likely built in 1701.  It is nothing short of amazing that it still survives. 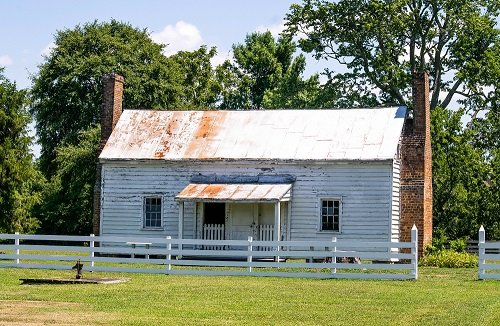 Behind the house on the northeast side is a circa 1829 framed structure that is believed to be a slave house.  It is the only surviving slave quarters on the plantation, and it is only one of the 18 slave dwellings that may have housed as many as 300 slaves at the beginning of the Civil War. Such a large number is a huge leap from the four slaves the Allen’s owned in 1675 and only 13 in 1700. The surge in slavery shows just how large the slave economy had become in Virginia by the outbreak of the Civil War. 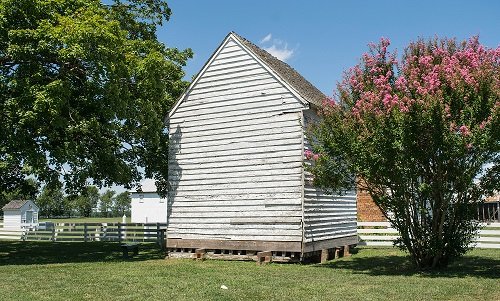 Also on the northeast side is a smoke house likely built in the 1850s.  It is a typically framed smokehouse with a raised roof and single door.  It’s incredible that a fire-vulnerable wooden smoke house could have survived all these years. 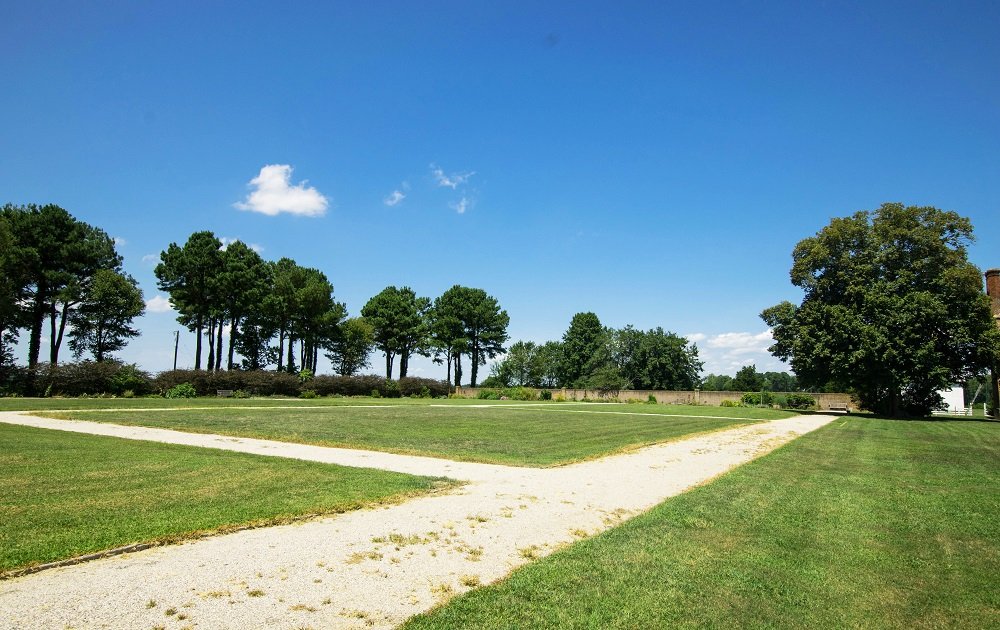 One of the most notable historic features of Bacon’s Castle is the formal garden.  Up until the 1980s historians had believed that gardens in 17th century Virginia were strictly utilitarian, intended to grow medicinal herbs and edible vegetables.  The pleasure garden where men and women leisurely strolled and sat to enjoy the views waited the Georgian period of the 18th century.

Archeological discoveries at Bacon’s Castle revealed that this was not true.  They showed that the Allens had built a formal English Renaissance garden sometime between 1680 and 1690.   It not only had plots for growing herbs and vegetables, but walkways and areas for people to sit and enjoy the garden.

Unusual in size and detail for Virginia of the time, Bacon’s Castle’s garden was, according to Margaret Page Bemiss, “. . . a Virginia garden of vegetables and medical herbs, embellished with some unusual English amenities.”  It was planted in a large rectangular space west of the house.  Outlined by a ten foot wide walkway, it contained six large rectangle raised planting beds.  A twelve foot wide north-south walkway and hedge cut the garden in half, while smaller eight foot crosswalks divided it between east and west. 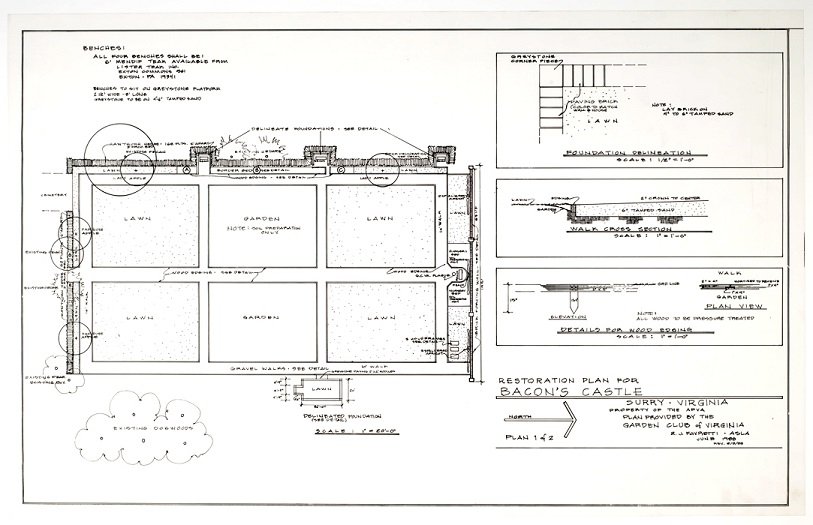 Restoration Plan for the Garden

The whole garden was surrounded by a six foot wide border bed and hedge.  On the north side was likely a brick forcing wall with two long narrow planting beds in front of it.  Along the back brick wall were likely sitting areas, called exedras, which may have had one or more benches sitting up against the wall. 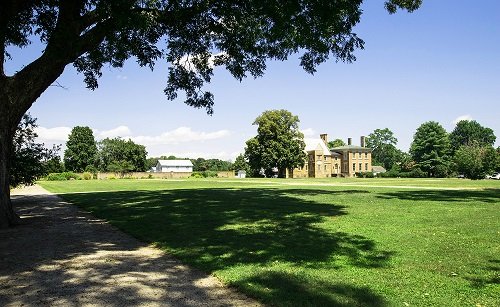 The garden we see today on a visit to Bacon’s Castle is only partially replicated and restored.  It was first built in 1988. Some of the beds have lawns instead of the planted herbs and vegetables that would have existed in 1690.